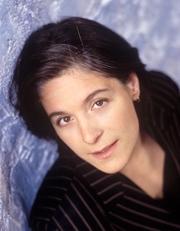 Robin Guarino is a theatre, opera and film director based in New York City and Cincinnati. She has directed over 90 original productions and her work has been presented by opera companies, theaters, orchestras and festivals including the Metropolitan Opera, The San Francisco Opera, The Houston Grand Opera, Canadian Opera Company, The Cincinnati Opera, Seattle Opera, Opera Theater of St. Louis,The Glimmerglass Opera Festival, The Bard Summer Festival, Avery Fisher Hall, Alice Tully Hall, and the BAM Next Wave Festival among others. Lincoln Center has long been an artistic home to Robin. She became a member of the Metropolitan Opera Stage Directing Staff in 1992 and has been invited back to direct over a dozen production including, Così fan tutte with James Levine for Live in HD and Der Rosenkavalier with Edo de Waart for Live in HD. Robin’s films have been shown at international film festivals throughout the United States and Europe and her film, Crossing the Atlantik was broadcast on Independent Focus, PBS.

Robin is deeply committed to the development of new work. She is the Co-Artistic Director of Opera Fusion: New Works and has helped developed 20 world premier operas for companies including, The Metropolitan Opera, LA Opera, Santa Fe Opera to name just a few. To date she has directed 7 world premier operas. Her recent production of the world premiere of Blind Injustice for Cincinnati Opera garnered national acclaim by the Wall Street Journal, NPR’s “All things considered”, and Opera News and was identified as groundbreaking new work and “opera as activism” addressing the theme of false incarceration in the criminal justice system.

A visionary of young artist training she has served as the Dramatic Advisor to the Juilliard Opera Theater (2004-2008) and the J. Ralph Corbett Distinguished Chair of Opera and Artistic Director at The Cincinnati College-Conservatory (2008-2019). She has been an artist-in-residence at the San Francisco Opera Center, Merola Program since 2002. She has held artistic residencies at The Glimmerglass Festival, The Wolftrap Opera Festival, The Lindemann Program, The Houston Grand Opera Young Artists program, and is in demand as a teaching artist. She is a tenured full professor at the University of Cincinnati College-Conservatory of Music.