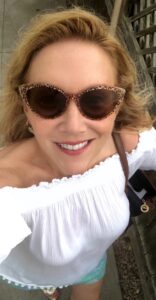 Robin Blauers directed the European Premiere of Mark Adamo’s Little Women at the Stadsschouwburg in Bruges, Belgium with maestro J. David Jackson from the Metropolitan Opera. Past productions for the Trentino Music Festival have included Mozart’s Die Zauberflöte, Puccini’s Suor Angelica, Poulenc’s Dialogues Des Carmelites, Britten’s The Rape of Lucretia, and The Turn of the Screw. Robin served as a Professor in Opera and Resident Stage Director for the Graduate Opera Department at The Hartt School, where she taught classes in acting and scene study. For Hartt she directed productions of Puccini’s Suor Angelica, Little Women, The Rape of Lucretia, and Carlisle Floyd’s Susannah. Also at Hartt, she was the founder and producing stage director for The Company, a music and theater training program for children ages 12-17 which was featured on CBS and National Public Television.

After graduating with an advanced degree in Opera Performance, Robin was the Resident Soprano with Connecticut Opera and was featured in such roles as Blondchen in Die Entführung aus dem Serail, Gilda in Rigoletto, Oscar in Un Ballo in Maschera, Olympia in Les Contes d’Hoffman and the Queen of the Night in Die Zauberflöte. Concert work included countrywide concert tours of Sweden and the United States as winner of the Jenny Lind Competition. Ms. Blauers appeared in recital for the Ambassador at the American Embassy in Stockholm, as well as on Swedish National Radio and Television. She performed extensively with the  Consortium Felicianum Orchestra throughout Germany and France. An enthusiastic crossover artist, Ms. Blauers has appeared in numerous musical theater productions including Gigi opposite actor John O’Hurley.